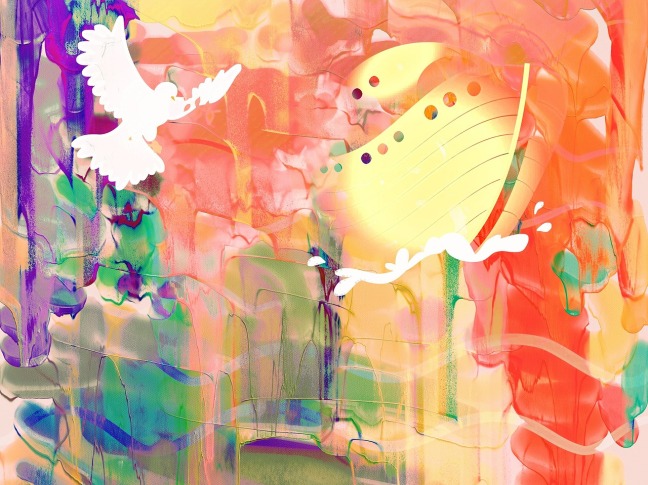 After the story of Adam and Eve and their children, the next significant personage we meet in Scripture is Noah (Genesis 6-10). Of all the people in the Bible, Noah is one of the most recognizable to the world at large. Most people, I believe, have heard of the Flood, the Ark, and the animals two-by-two.

When I was a young boy living with my family in Jacksonville, FL, I remember listening to country music playing on the radio in the hallway of our small house. Or perhaps it was one of our mom’s Capitol records playing on the phonograph. One of the most memorable songs was Tennessee Ernie Ford singing “Noah Found Grace in the Eyes of the Lord.”

There is so much that is wrong with this song, but since its primary purpose is to entertain, I won’t be too hard on the lyrics, except to say this: The lyrics express what I believe most people, including Christians, believe about Noah. Most people seem to believe that, in the midst of a world gone mad with wickedness, God searched around until He found one good man He could use.

The Bible actually reveals something different. According to the Genesis account…

Genesis 6:5 The Lord saw that the wickedness of man was great in the earth, and that every intention of the thoughts of his heart was only evil continually. 12 And God saw the earth, and behold, it was corrupt, for all flesh had corrupted their way on the earth.

God saw humanity in its entirety, wicked beyond measure. The intention of every person was to do evil, so much so that God determined that destruction was a more profitable response than redemption. This included all people on the earth, a statement that would have included Noah except for grace.

Genesis 6:8 But Noah found grace in the eyes of the LORD. 9 These are the generations of Noah: Noah was a just man and perfect in his generations, and Noah walked with God.

The word “generations” may refer to “the chronological procession of history as humans shape it,” or “successive generations in one family.” However, the word may also refer to “everything entailed in a person’s life.” [1] Verse 9, therefore, describes the righteousness and the obedience of Noah.

Some people will argue that verse 8 says that God showed favor to Noah and that verse 9 tells why He did so. If this is true, then maybe the song is right. God showed favor or grace towards Noah because Noah was a good guy who believed in God and did not share in the evil, wicked desires of the world. However, there are at least two reasons why I do not believe this is true.

First is the fact that God said in verse 7, “I will blot out man whom I have created from the face of the land” and in verse 12 that “all flesh” was corrupted. The condemnation appears to be universal, which would include Noah.

God did not say, “Let me look to see if I can find at least one righteous person that will do what I say.” He determined to destroy all of humankind, including Noah, except that the way God accomplishes His eternal purpose is through the willful decisions of men.

Second is the definition of the word grace, which is really a very simple one. The word means “unmerited favor,” and is never granted in response to anything good or deserving in the recipient. Romans 11:6 makes it very clear that if God grants spiritual standing on the basis of merit or works, then He does not do so on the basis of grace.

Grace belongs to God, and He grants it to whomever He desires, regardless of who they are or the condition of their heart and lives (Exodus 33:19; Romans 9:18). God did not grant grace to Noah because Noah was good, but because God is good.

As with the story of Adam, there is also an issue of chronology. The Bible does not tell us when Noah experienced the grace of God. Noah was a direct descendant of Adam, and therefore existed in a fallen condition in need of redemption, as with any other human. Since God formed the plan of redemption in eternity and had not given any indication that the plan was altered, if Noah were to be saved, it would happen by grace through faith.

Hebrews 11 may be located near the end of the Bible, but its truths extend all the way back to eternity before creation. Man has never been able to please God apart from faith (Hebrews 11:6). Verse 7 of that same chapter of Hebrews refers to God’s call of Noah to righteousness by faith.

Hebrews 11:7 By faith Noah, being warned of God of things not seen as yet, moved with fear, prepared an ark to the saving of his house; by the which he condemned the world, and became heir of the righteousness which is by faith.

If you need evidence that Noah was included among the wicked people of his generation, look at what happened after he recovered from the flood. Genesis 9:20 tells us that Noah planted a vineyard, made some wine, and got falling down drunk and naked.

With these thoughts in mind, then Genesis 6 does not tell us that God chose a good man to accomplish His purpose, but that by grace He chose a man (verse 8) and made him good (verse 9) so that that man could hear the word of God and respond in righteousness and obedience.

The words Noah and grace are spelled with the same two letters, but in reverse. That is what grace does. It brings about repentance – a complete reversal of fortune, of direction, of outcome. It turns the wicked into righteous. It converts a heart of rebellion into a heart of obedience to the will and the work of God.

God did not invite Noah or ask Noah if he wanted to serve him. Salvation belongs to the LORD. (Psalm 3:8) God simply saved Noah by grace, made sure he knew he was saved and safe, then commanded or commissioned him to complete a work that God had planned for him to accomplish before the foundation of the world. (See Ephesians 2:10)

God did not ask Noah if he was interested in fulfilling God’s purpose. God simply began giving commands. God said…

I will establish my covenant with you (Noah), and you shall come into the ark, you, your sons, your wife, and your sons’ wives with you.” When God finished explaining to Noah what He wanted Noah to accomplish, the Bible says, “Noah did this; he did all that God commanded him.” (Genesis 6:18, 22)

True faith will always be manifest in obedience to the commands of God. The two concepts of faith and works are inseparably intertwined. One without the other is useless and dead (James 2:17).

Noah did not pray some prayer and invite God into his world or into his heart of his own will; God, by His own will and design, called Noah into the kingdom and converted his heart. Noah willingly built the ark, but only after God had redeemed Noah’s heart and his corrupted will, and molded Noah’s will to match the purpose of God.

This is how God accomplishes His eternal purpose – through the willful decisions of man.