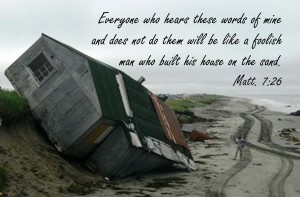 When Jesus used the word “rock,” to whom or to what was He referring?

Read verse 24 once again and ask, “What was it that this man did that caused Jesus to refer to him as ‘wise’?”

The answer? He built his house on a rock. But what rock?

Once again, almost everyone I have ever asked has identified the rock in this parable as Jesus.

But the context demonstrates that Jesus is not talking about belief in himself, but in works – in obedience.

The rock on which the wise man builds his security is obedience.

Clearly, the difference between the wise man and the foolish man is not their profession of faith in Jesus, but their obedience to the teachings and the commands of Jesus.

“He (Jesus) was speaking in the character of a wise Master-builder who saw in fervent faith and unhesitating obedience the ground-work on which the Christian society, which He designated as His kingdom, was to rest.” [2] (Emphasis added.)

“By the similitude of two builders our Lord warns his followers that to have heard his words will have been useless unless they put them into practice…in the imagery the rock represents practice; the sand, mere sentiment…Assent is insufficient; there must be action…apart from practice, there is (ver. 23) no heart-union with Christ.” [3]

In other words, where there is no obedience to the commands of Christ – no life-application of the truths taught by the word of God – then there never was a salvation experience.

This takes us to the very core of why there is a plan of redemption in the first place. God is perfect and complete in every way. He needs nothing from us. In fact, He doesn’t even need us.

God did not look down on Creation one day, see the unfortunate mess that man had gotten himself into, and then decide to rescue him. God rescues man for God’s own glory and for the fulfillment of an eternal plan set into motion before the foundation of the world.

The entire plan of redemption is about God glorifying himself. We are simply the blessed recipients of a mysterious spiritual objective that God began in eternity past and will complete in eternity future. [4] Forgiveness, restoration, rescue from death and hell, peace, love, and joy, heaven, streets of gold…all these are the overflow of God’s plan of redemption of which saved people are the beneficiaries.

Somewhere along the line, this message has gotten lost in the teaching of the church. Too many Christians – or at least those who claim to be Christians – are convinced that everything in the gospel message is about humans. God loves us and has a plan for us. If we say a pre-fabricated prayer and invite Jesus into our hearts (neither of which can be supported by Scripture), then we’ve got our ticket and nothing else is required.

After all, salvation is about grace, not works. Right?

Church rosters are filled with people who have never done anything in relationship to the commands of Christ, yet if asked, would declare themselves to be members of the family of God. But listen to how Jesus defined the family of God.

Matt. 12:50 Whoever does the will of my Father in heaven is my brother and sister and mother.

Point 1: A person not actively involved in fulfilling the commandments and the teaching of Jesus is not a part of the family of God.

Church members are very quick to declare themselves blessed, but who is it that is truly blessed by God? Once again, Jesus makes this very clear.

John 13:17 If you know these things, blessed are you if you do them.

John 14:23 Jesus answered him, “If anyone loves me, he will keep my word, and my Father will love him, and we will come to him and make our home with him.”

Point 3:  This verse is tough, for sure, and is deserving of much deeper study, but it seems to say that if one’s heart is not an obedient heart, then it is not the dwelling place of God.

We sometimes sing a song entitled “I Am a Friend of God,” but those who are friends of God prove their friendship, not by their good behavior and regular church attendance, but by their obedience.

Point 4:  This seems pretty straight forward. If a person fails or refuses to be obedient to the teachings and commands of Christ, that person is not a friend of God.

The sad thing – and the scary thing – about this is that there is coming a day of reckoning when everyone will give an account of themselves. Every person – as an individual with no other friend or relative to stand with them – will stand before the judgment seat of Christ and be judged on the basis of works.

Romans 2:5 …on the day of wrath when God’s righteous judgment will be revealed. 6 He will render to each one according to his works: 7 to those who by patience in well-doing seek for glory and honor and immortality, he will give eternal life; 8 but for those who are self-seeking and do not obey the truth, but obey unrighteousness, there will be wrath and fury.

Many will argue that this cannot be true since we are not saved on the basis of works, readily quoting Ephesians 2:8-9 as their biblical support. While I and every good evangelical must agree that a person’s works will not earn salvation, I must also emphasize that a person’s works will prove whether what they experienced in life was true salvation or just a contented form of religion.

Point 5: Where there are no works – where there is no obedience to the Great Commission and other commands of Jesus – there never was salvation.

The invitation of Jesus is so very different from the watered-down, unbiblical invitation offered from many pulpits today.

Jesus’ invitation is not “Follow me and I will feed you, clothe you, house you, keep you from harm, and make your life easy.” His invitation is “Follow me, and I will make you fishers of men.” (Matt. 4:19) Jesus calls us with the intention of making something out of those who follow.

Does any of this sound similar to the invitation you heard following last week’s sermon?

Finally (at least for this blog), Jesus added one more caveat to His invitation.

Matt. 16:24 If anyone would come after me, let him deny himself and take up his cross and follow me.”

Point 6: Contrary to what songs or preachers or Sunday School teachers may have told us, Jesus did not bear my cross or your cross or anyone else’s cross to Calvary. He bore His own cross and our sins. Every Christian is called to bear his own cross, not for the purpose of salvation, but obedience, even unto death if necessary.

That is what salvation is all about.

[4] The words “past” and “future” have no relevance in relationship to eternity. However, from the perspective of humankind – bound by the limitations of time and space – the terms are useful in demonstrating continuity of purpose.