Romans 10:9 …if you confess with your mouth that Jesus is Lord and believe in your heart that God raised him from the dead, you will be saved. 10 For with the heart one believes and is justified, and with the mouth one confesses and is saved… 13 For “everyone who calls on the name of the Lord will be saved.” (ESV) 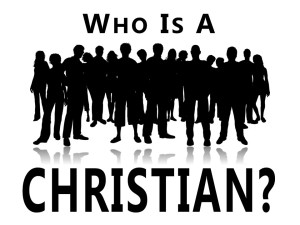 Will Durant said, “The greatest question of our time…is whether man can live without God.” [i]

In light of the continuing degradation of our own culture (U.S.A.) as well as that of the rest of the world, we may discover the answer to that question in our own lifetimes or at least in the lifetime of our children. Therefore, we need to take a strong look at who we are as we prepare ourselves and our families for how to live in a post-God world.

One of the questions we must be able to answer with strong conviction and with strong biblical support is “Who Is a Christian?”

What does the name “Christian” mean?

First of all, if someone were to ask you to give a clear, biblically supported definition of a Christian, how would you respond? Today the term Christian is used very loosely and inaccurately, even by those who profess to be Christians.

Sometimes it is used to refer specifically to those who know Christ as Savior. That’s the way those who are in an evangelical church would answer, and the way most of the world would have answered several years ago.

In many cases, it is a term of derision. Sometimes this results from the moral failures of prominent leaders of Christian organizations. Most of the time, however, such derision arises from those who are offended by the believer’s claim of exclusivity – the biblical truth and our confession that Christ is the only means of salvation.

The website, religioustolerance.org, lists over 40 different definitions of the term “Christian” from various sources.

This website defines Christianity as “any faith group or individual that sincerely, thoughtfully, seriously, and prayerfully regards themselves to be Christian.” Because their definition is so broad and so general, many groups are included under the umbrella of Christian believers.

Obviously, there is much confusion about who really is a Christian.

In the Bible, the Jews referred to the followers of Jesus as Galileans or Nazarenes or the men of The Way, none of which was meant to be complimentary.

The followers of Christ referred to themselves as believers, brethren, or saints, but the name they most often used to refer to themselves was “disciples.”

We learn from Luke that the disciples were called Christians first in Antioch. (Acts 11:26) Though there has been much conjecture about the source of the name, nothing can be positively concluded.

According to A. T. Robertson, the name was probably given to the followers of Christ by the non-Jewish peoples or the Romans simply to distinguish them from the Jews. Alfred Barnes said, it is of little consequence where the name originated. It soon became a name of reproach; and has been used that way in all ages since. [ii]

John Calvin called Christians “the people whose Captain is Christ and who glory in his name.” [iii]

This concept or understanding is important because it puts the focus of Christianity where it belongs – not on man and his sin, but on Christ and His righteousness.

Someone has said that you cannot get someone saved until you first convince them that they are lost. As a result, almost every evangelistic training program begins with an emphasis on man and his sinfulness. Here is where our evangelistic efforts go astray.

There is no biblical mandate that obligates me as a preacher, as a missionary, as an evangelist, or as a Christian to tell a lost person how bad he is or to try to convince him that he is lost.

In John 3:19-20, Jesus said, “…the light (meaning Jesus, the Son of God) has come into the world, and people loved the darkness rather than the light, because their deeds were evil. For everyone who practices evil hates the light (hates Christ and everything about Him, including His church) and does not come to the light, lest his deeds be exposed.

Let me paraphrase what I believe Jesus was saying:

People do not come to Christ as Savior because they know that He is righteous and that they are sinners, and they prefer being sinners rather than being saved, because if they come into the light of Christ, the dark things they have been doing will be seen and judged by the light of the righteousness of Christ.

The primary work of the Christian is to fulfill the Great Commission – that is, to make disciples – to use the word of God to share the message – the Good News – of Jesus, the Christ.

That is the biblical mandate and the very essence of discipleship.

Now, back to the original question:

Who is a Christian?

Is there a test by which we might determine whether or not another person is truly a child of God?

Many – and I might say most – people who identify themselves as Christians are seriously offended at the thought of such an idea. The American culture has taught us to believe that we are independent spirits with the right of self-determination, and therefore, the right to define terms as we please.

I had one person who professed to be a Christian tell me in anger, “If a man says he is a Christian, then that’s all I need to know. His profession makes him a Christian. And I don’t have any right to question.” Yet the Bible goes to great lengths to prove that this cannot be true – that a simple profession of faith without evidentiary works is inadequate to prove salvation.

Since we have to start somewhere, let’s begin with the reference from Romans 10 at the beginning of this article.

People who believe that the lost person must confess their sin quote 1 John 1:9 as their biblical defense. However, John was not writing directly to lost people in his epistles, but to the church. He wrote to give, not the means of salvation (although these can be found in 1 John), but to give the assurance of salvation (1 John 5:13).

That does not mean that a person who acknowledges Christ as Lord will not confess their sin. It just means that such a confession is not a requirement for salvation.

One problem is that we confuse repentance with confession, yet even then, the Bible never calls on the lost person to repent of sin for salvation, but to repent from sin. There’s a big difference, which will require another article.

In verse 13 of Romans 10, Paul writes, “Whosoever shall call upon the name of the Lord shall be saved.” (KJV)

Because our concept of salvation is so man-centered, the most important word in this verse is the word “whosoever.” Why? Focusing on the word “whosoever” makes the verse all about us. However, the true focus of the verse in the context of this chapter of Romans is “the name of the Lord.”

To confess Christ means that a person will openly and willingly and publicly tell other people that Jesus is Lord over all Creation and insist that “there is no other name under heaven given among men by which we must be saved.” (Acts 4:12, NKJV)

The Bible speaks of confessing Christ in several other places. Here are two examples:

1 John 4:2-3 Everyone who confesses openly his faith in Jesus Christ – the Son of God, who came as an actual flesh-and-blood person – comes from God and belongs to God.  And everyone who refuses to confess faith in Jesus has nothing in common with God. (The Message)

[ii] Reference by Robertson and Barnes from Notes on Acts 11:26, Online Bible software.

One thought on “Who Is a Christian, Part 1”