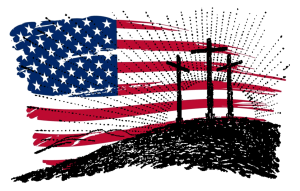 Philippians 3:18 For many, of whom I have often told you and now tell you even with tears, walk as enemies of the cross of Christ. 19 Their end is destruction, their god is their belly, and they glory in their shame, with minds set on earthly things. 20 But our citizenship is in heaven, and from it we await a Savior, the Lord Jesus Christ,

We live in a crazy, mixed up world. Our nation seems to have lost its collective mind when it comes to politics and a social agenda. Or maybe I’m just getting old and looking at the situation through a narrow lens. Either way, patriotism cannot be taken for granted as it was in my younger days.

Can a Christian be patriotic?

Should a Christian be patriotic?

If you’re like me and were raised to take patriotism for granted, then such questions appear to be out of place. They almost seem to be rhetorical. For those in my generation who were raised as I was, the answer is an unequivocal “Yes!”

Yet the questions are worth considering and answering in light of Scripture, not culture and tradition. Though most of us would probably wind up somewhere in the middle, there are typically two extreme answers to this question:

The first (whick I will deal with in this article) is that patriotism is synonymous or analogous with Christianity or maybe that the two are metonymic. [1]

The second is that a true Christian cannot be patriotic.

The first answer says that a true Christian will certainly be a dedicated patriot, and to fail to be patriotic is, in fact, unchristian. The terms are metonymic because many people believe that anyone who is Christian is, by default, a patriot. And a true patriot, while not necessarily practicing Christianity himself, will identify with it strongly.

One reference used in defense of this argument is from Paul’s letter to the church at Rome.

Romans 13:1 Let every person be subject to the governing authorities. For there is no authority except from God, and those that exist have been instituted by God. 2 Therefore whoever resists the authorities resists what God has appointed, and those who resist will incur judgment… 5 Therefore one must be in subjection, not only to avoid God’s wrath but also for the sake of conscience… 7 Pay to all what is owed to them: taxes to whom taxes are owed, revenue to whom revenue is owed, respect to whom respect is owed, honor to whom honor is owed.

There are many points that could be made from this text, but for the purpose of this article, the most important are these:

God uses even evil and wicked governments to achieve His purposes, [2] and He calls His people to be submissive even to those governments. There may come a time when a particular government demands that the Christian participate in immoral actions or cease from being obedient to the calling of God when the Christian may withdraw his or her submission.

In times like these, we should follow the counsel of Peter and the apostles who declared in Acts 5:29, “We must obey God rather than men.” Even then, however, our attitude toward such a government must be expressed with gentleness, courtesy, and respect (1 Peter 3:15).

Peter explained how the Christian should see the government of the country in which they live.

1 Peter 2:13 Be subject for the Lord’s sake to every human institution, whether it be to the emperor as supreme, 14 or to governors as sent by him to punish those who do evil and to praise those who do good. 15 For this is the will of God, that by doing good you should put to silence the ignorance of foolish people. 16 Live as people who are free, not using your freedom as a cover-up for evil, but living as servants of God. 17 Honor everyone. Love the brotherhood. Fear God. Honor the emperor.

As those who live in a free country under the protection of a relatively unassailable Constitution, Christian Americans should take advantage of our freedom, not to do what we want to do, but to do what God has called us to do.

One way we do that is to constantly pray for those who serve in government.

1 Timothy 2:1 First of all, then, I urge that supplications, prayers, intercessions, and thanksgivings be made for all people, 2 for kings and all who are in high positions, that we may lead a peaceful and quiet life, godly and dignified in every way. 3 This is good, and it is pleasing in the sight of God our Savior, 4 who desires all people to be saved and to come to the knowledge of the truth.

In other words, we are to pray for our leaders, not so much for their sake, but for ours. We are to pray that our own nation and our own government will leave us alone to pursue the practice of our faith as God has called us to do – to share the gospel so that people will be saved and come to a knowledge of the truth.

In 2002, just three months after the events of 9/11, Andrew Sandlin wrote about Christian patriotism.

Christian patriotism in the United States is necessary because it cultivates and defends the sort of minimal civil government that the Bible requires. We are patriots not because we have a love affair with the United States as such; we are patriots because the principles on which the nation was founded allow Christianity to flourish. [3]

Christian patriotism is easily defended when we hear from the men God raised up in the early days of the establishment of this country.

“Providence has given to our people the choice of their rulers, and it is their duty – as well as privilege and interest – of our Christian nation to select and prefer Christians for their rulers.” [5]

After citing multiple sources as precedents, SCOTUS declared in this case, “These, and many other matters which might be noticed, add a volume of unofficial declarations to the mass of organic utterances that this is a Christian nation.” [7]

Thus biblically and historically, there seems to be support for the idea that a Christian should, to some extent anyway, practice patriotism.

[1] Just so you know, metonymic is not a part of my daily vocabulary. I had to look this word up. A metonym refers to “a figure of speech consisting of the use of the name of one thing for that of another of which it is an attribute or with which it is associated (such as “crown” in “lands belonging to the crown.” Definition from Miriam-Webster Dictionary online.

[2] This would be a great study, too large for this context. Yet consider how God use Egypt, Assyria, Babylon, Persia, and even Rome to accomplish His purposes through His people.

[4] There has been some controversy over whether these words were actually spoken by John Adams, but apparently sufficient evidence has come to light to prove it an accurate quote. If interested, I suggest you read this online article.

[5] This quote by John Jay, the first Chief Justice of SCOTUS, comes from an online PDF version of The Life of John Jay, Vol. 2, written by his son, William Jay. The quote is found on p. 376 in a letter to John Murray, dated 12 October 1816.

[6] This quote has for many years and on a myriad of occasions been attributed to SCOTUS. However, much research has been done to confirm the accuracy of the quote. In doing so, researchers have confirmed that the quote was not made by SCOTUS, but by the Illinois Supreme Court in 1883.  Confirmation Source 1   Confirmation Source 2

[7] Although a U.S. court may one day overturn the conclusion of this ruling, SCOTUS did officially recognize the U.S. as a Christian nation. You can read the decision here. Justice David J. Brewer, author of the 1892 Holy Trinity opinion, wrote a book called The United States: A Christian Nation (1905). You can read a significant quote from the book here.